One day about a decade ago, I was loading CDs (remember those?) onto my iTunes and discovered that a John Surman disc’s metadata had listed “ECM” as its genre. It was a funny gaffe for a moment … but soon I started to question whether it was a gaffe. Doesn’t ECM Records have its own style, its own idiosyncrasies that we all immediately recognize as belonging to the label? The generous use of space, the embrace of various flavors of avant-garde, the intellectual demeanor, the harmonies and ambience of European art music … and, of course, the five seconds’ silence that introduces every release. Maybe the Surman CD was trying to make a point.

This year marks the 50th for ECM’s operation, which began in Munich in 1969. In that time it has produced some of the most beautiful, genre-busting jazz music in the world, and in the process provided a forum for a vast number of great European musicians who made their reputations through ECM releases. The label isn’t jazz-exclusive; it also issues new age and contemporary classical titles, as well as most of director Jean-Luc Godard’s film soundtracks since the 1990s. But listen to their jazz releases, and all that will seem appropriate.

To pare down ECM jazz to 10 titles is a ludicrous proposition, of course. The 10 here represent major landmarks—by no means all of them—in both American and European domains. Far too many have been omitted, and what’s left is listed chronologically rather than in order of significance. Let the arguments begin. 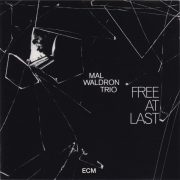 1. Mal Waldron: Free at Last (1969)
ECM’s first release was, if not an outright statement of intent, a fierce embrace of distinctive sounds. It was a reintroduction to American pianist Mal Waldron, who had recently moved to Europe after a traumatic near-death experience following a heroin overdose. At 44, onetime hard-bopper Waldron radically reconceives his modern jazz on Free at Last. His playing is all about prodding rhythmic figures, usually expressed in short riffs that repeat as chords on the left hand and as melodic motifs on the right. Most often they drone: Any sense of “playing the changes” is purely incidental. It’s the rhythmic momentum, and the melodies that momentum generates, that matter. It’s doubtful that anyone who heard Free at Last in its day took particular notice of its fledgling label, but an unheeded message is still a message: We’re on a different wavelength.

In an interview with Wayne Enstice and Janis Stockhouse in Jazzwomen: Conversations with Twenty-One Musicians more than 20 years ago, pianist/composer Joanne Brackeen described herself … END_OF_DOCUMENT_TOKEN_TO_BE_REPLACED

In 2020, to celebrate JazzTimes’ 50th anniversary, we made a bold (some would say foolhardy) call: the top 50 jazz albums of the past 50 … END_OF_DOCUMENT_TOKEN_TO_BE_REPLACED

In 2020, to celebrate JazzTimes’ 50th anniversary, we made a bold (some would say foolhardy) call: the top 50 jazz albums of the past 50 … END_OF_DOCUMENT_TOKEN_TO_BE_REPLACED

In 2020, to celebrate JazzTimes’ 50th anniversary, we made a bold (some would say foolhardy) call: the top 50 jazz albums of the past 50 … END_OF_DOCUMENT_TOKEN_TO_BE_REPLACED