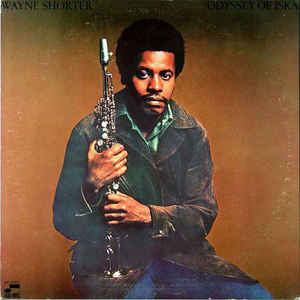 Before he joined Weather Report, Shorter made a fusion album of his own, deeply influenced by Bitches Brew and, if anything, even weirder. (Among other things, Gene Bertoncini’s guitar wasn’t far removed from what Zoot Horn Rollo was then doing for Captain Beefheart, or what Bern Nix would soon do for Ornette Coleman’s Prime Time.) Yet it might be a bit of a cheat to lump Odyssey of Iska in with the post-Bitches Brew assemblage, because it’s also a rather organic evolution from Shorter’s own previous Blue Notes, 1969’s Super Nova and 1970’s Moto Grosso Feio (though the latter wouldn’t be released until 1974). Even so, it fits like a glove with Miles’ attempts to plumb the darkest underbelly of the avant-garde. What’s more, it uses a similar expanded rhythm section: the twin basses of Ron Carter and Cecil McBee, and triple drums by Billy Hart, Alphonse Mouzon, and Frank Cuomo. It also puts Shorter on the looser, more abstract path of composition that he’s continued exploring ever since.

Jim Keltner is, in two words, a legend, since the 1960s one of America’s most in-demand session drummers, lending not only impeccable chops but an … END_OF_DOCUMENT_TOKEN_TO_BE_REPLACED

Gregory Porter got a late start as a recording musician, but that was because he was busy flexing his chops on a culinary stage. His … END_OF_DOCUMENT_TOKEN_TO_BE_REPLACED

The sound that Horace Silver pioneered in the ’50s and ’60s—for a while, all but synonymous with the sound of Blue Note Records—is for many … END_OF_DOCUMENT_TOKEN_TO_BE_REPLACED