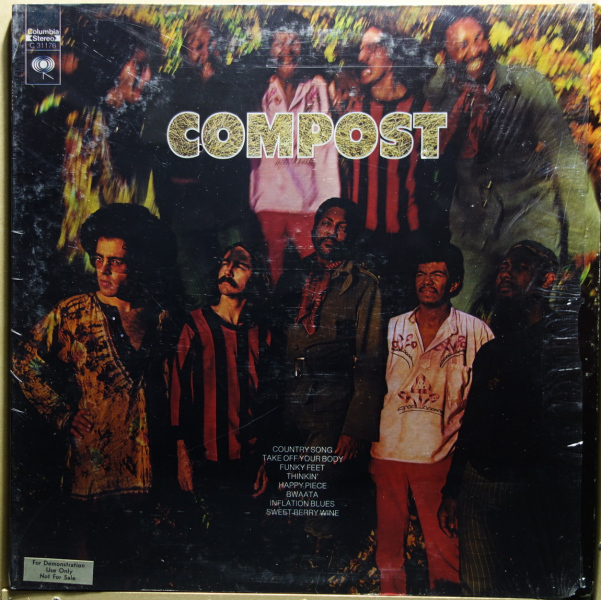 Brilliant and revolutionary as Miles Davis’ fusion work was, it might have been the now-forgotten band Compost that best, out of all the early fusion ensembles, captured the zeitgeist of black popular music. They were as pop-friendly, rhythmically ingenious, and socially conscious as Sly and the Family Stone; as warm and humorous (if not as cartoonish) as Parliament; as forthrightly African as Fela Kuti; as trippy as Jimi Hendrix and Funkadelic; as melodically charged as Stevie Wonder; and as curious and experimental as all of the above. They also just happened to feature Bitches Brew percussionist Juma Santos and drummer Jack DeJohnette. In fact, DeJohnette was also the group’s keyboardist, vibraphonist, primary composer and, most remarkably, lead singer. Joining them were saxophonist Harold Vick, bassist Jack Gregg, and drummer Bob Moses, who could set a sumptuous groove with the best of them, then extemporize on it (“Bwaata,” “Sweet Berry Wine”) better than the best. Take Off Your Body was the first of only two Compost albums: DeJohnette later diagnosed them, probably correctly, as too experimental to last. But oh, what criminally overlooked greatness they achieved during that short time.

Jim Keltner is, in two words, a legend, since the 1960s one of America’s most in-demand session drummers, lending not only impeccable chops but an … END_OF_DOCUMENT_TOKEN_TO_BE_REPLACED

Gregory Porter got a late start as a recording musician, but that was because he was busy flexing his chops on a culinary stage. His … END_OF_DOCUMENT_TOKEN_TO_BE_REPLACED

The sound that Horace Silver pioneered in the ’50s and ’60s—for a while, all but synonymous with the sound of Blue Note Records—is for many … END_OF_DOCUMENT_TOKEN_TO_BE_REPLACED

If you want to find out how good your sound system is, the worst way to do it is to play your favorite jazz albums. … END_OF_DOCUMENT_TOKEN_TO_BE_REPLACED