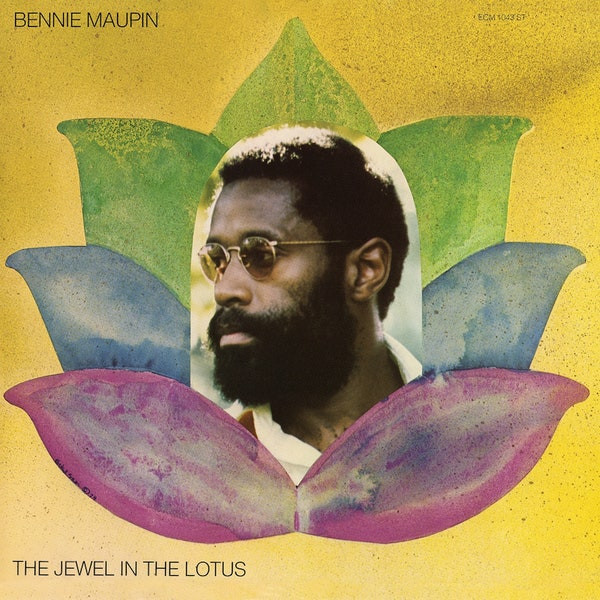 By the time he debuted as a leader with The Jewel in the Lotus, Bennie Maupin was one of the best-traveled musicians in jazz fusion. His bass clarinet had made its distinctive mark on not just Bitches Brew, but three subsequent Miles Davis records; Herbie Hancock’s recordings with both his Mwandishi and Head Hunters bands; and Woody Shaw’s free-fusion subversion Blackstone Legacy. None were quite in the same dimension as The Jewel in the Lotus, a meditative and mesmeric affair that found Maupin as occupied with flute and soprano saxophone as with his bass clarinet. Featuring Hancock and most of Mwandishi (though trumpeter Charles Sullivan stands in for Eddie Henderson), Jewel also adds a second drummer (and marimbaist), Freddie Waits, alongside Billy Hart, and Bill Summers on bells and percussion. Two drummers and a percussionist do not usually a meditation make. Here, though, Maupin pulls it off. Even “Song for Tracie Dixon Summers,” which starts off with Buster Williams doing a mean Mingus riff, becomes an ethereal piece that hangs in the air on the frame of Hancock’s acoustic piano.

Jim Keltner is, in two words, a legend, since the 1960s one of America’s most in-demand session drummers, lending not only impeccable chops but an … END_OF_DOCUMENT_TOKEN_TO_BE_REPLACED

Gregory Porter got a late start as a recording musician, but that was because he was busy flexing his chops on a culinary stage. His … END_OF_DOCUMENT_TOKEN_TO_BE_REPLACED

The sound that Horace Silver pioneered in the ’50s and ’60s—for a while, all but synonymous with the sound of Blue Note Records—is for many … END_OF_DOCUMENT_TOKEN_TO_BE_REPLACED

If you want to find out how good your sound system is, the worst way to do it is to play your favorite jazz albums. … END_OF_DOCUMENT_TOKEN_TO_BE_REPLACED