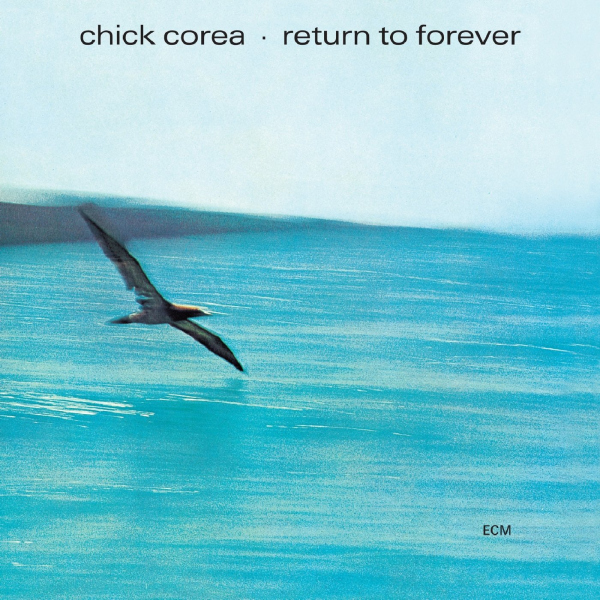 The first album by Return to Forever was initially not available in America; U.S. audiences wouldn’t experience it until 1975, by which time another four RTF albums had been released. Had they heard it in 1972, though, it would still have been a complete surprise. On Bitches Brew, Chick Corea had been responsible for some of the most mysterious, abstract, foreboding keyboard playing on any album (jazz or otherwise) ever released. Return to Forever, however, is accessible, melodic, and hook-filled; its grooves (by Corea, bassist Stanley Clarke, and drummer Airto Moreira) range from mellow ride to bouncy polyrhythm; there’s even a lively, (dare we say) happy bossa-nova tune in “What Game Shall We Play Today,” with a kicky flute line from Joe Farrell and a pleasant lilt in Flora Purim’s vocal. Even the obligatory sidelong epic, the medley “Sometime Ago/La Fiesta,” is most remarkable for its immediate allure. Its Latin beat and dreamy, welcoming Purim vocal are accompanied by a gently rippling electric piano surface that glistens like sun on the ocean. This hard centrist turn would, along with Mahavishnu’s chops-fests, eventually outdo Bitches Brew as a template for jazz fusion in the ’70s. In its moment, though, Return to Forever was as refreshing and original as its forerunner.

Jim Keltner is, in two words, a legend, since the 1960s one of America’s most in-demand session drummers, lending not only impeccable chops but an … END_OF_DOCUMENT_TOKEN_TO_BE_REPLACED

Gregory Porter got a late start as a recording musician, but that was because he was busy flexing his chops on a culinary stage. His … END_OF_DOCUMENT_TOKEN_TO_BE_REPLACED

The sound that Horace Silver pioneered in the ’50s and ’60s—for a while, all but synonymous with the sound of Blue Note Records—is for many … END_OF_DOCUMENT_TOKEN_TO_BE_REPLACED