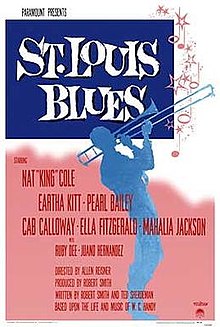 8. St. Louis Blues (1958)
Bolden is jazz’s lost, lore-laden figure, but W.C. Handy, who was not lost, might have been forgotten if not for the efforts of Louis Armstrong—who revered him—and this Nat King Cole-starring film, with a sizable assist from Eartha Kitt. Handy’s music was loaded with the blues. The best jazz often is, a trend/reality that Handy helped fructify. My passion for this one stems from that earthy quality. Ella Fitzgerald, who also has a part here, was so smitten with the title song that she worked it into her concerts, and Cole’s album of Handy cuts is one of the top dusty-drawer treasures of his output, buried away in a cloth sack in a bin in a mine. But now you know where to find it.

Eddie Harris [saxophonist/keyboardist/vocalist, 1934-1996] means everything to me. I feel like if Eddie Harris wasn’t there, my life quality would have been completely different. He … END_OF_DOCUMENT_TOKEN_TO_BE_REPLACED

To use an age-old (but appropriate) simile, choosing the top 10 recorded examples of jazz drumming is like trying to pick your favorite child. Each … END_OF_DOCUMENT_TOKEN_TO_BE_REPLACED

This year marks the 50th anniversary of JazzTimes—and you can help us celebrate. We’re compiling a feature for our upcoming 50th-anniversary issue on the top … END_OF_DOCUMENT_TOKEN_TO_BE_REPLACED