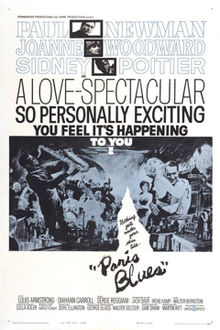 7. Paris Blues (1961)
I partly love this one as I do because at one point Paul Newman, who plays a trombonist named Ram Bowen—“Ram it, baby!”—loses his cool when his girl incorrectly says that she feels badly, which causes him to act out the grammatical difference between that and feeling bad. It’s funny, but it makes a point that will stick with you. Sidney Poitier is an expat saxophonist who is pure cool blues. But he’s Poitier, so he’d have to be, right? More fervid is Louis Armstrong as Wild Man Moore. This is, like the Krupa pic, another “should I or shouldn’t I give up on my music” conflict film. Newman commits to domesticity after not being able to handle some simple feedback—which doesn’t make a lot of sense, but hey, it’s a broad-ish, inspirited movie, not honed Chekhovian diegesis. But still punchy. Which is why Newman, in the jazz hero moment, flips back to his music.

Eddie Harris [saxophonist/keyboardist/vocalist, 1934-1996] means everything to me. I feel like if Eddie Harris wasn’t there, my life quality would have been completely different. He … END_OF_DOCUMENT_TOKEN_TO_BE_REPLACED

To use an age-old (but appropriate) simile, choosing the top 10 recorded examples of jazz drumming is like trying to pick your favorite child. Each … END_OF_DOCUMENT_TOKEN_TO_BE_REPLACED

This year marks the 50th anniversary of JazzTimes—and you can help us celebrate. We’re compiling a feature for our upcoming 50th-anniversary issue on the top … END_OF_DOCUMENT_TOKEN_TO_BE_REPLACED