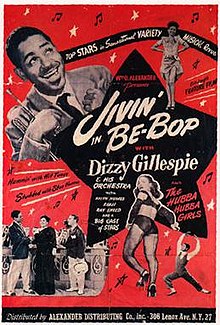 6. Jivin’ in Be-Bop (1947)
Plot? Ha, you don’t need a plot when you have music this good. That’s what I imagine the pitch was for this film, which features Milt Jackson, John Lewis, Helen Humes, Ray Brown, and Dizzy Gillespie tearing through 19 musical and dance numbers. Call it the movie-as-revue. It’s also a little surreal, as M.C. Freddie Carter keeps trading jokes with Gillespie—just a couple dudes hanging out and having a time, like they’re you and me taking in a show: Look, there we are! There is some debate whether Gillespie’s cuts were prerecorded, but they were not, so dig in for some prime live bop-era Diz. Bop didn’t last as long as you might think, with the war cutting into everything. This is the moment when it was at its most protean. Dig the hoodoo fires and tell me what music blazes more than Gillespie’s when he was dead-centered on tearing it up, between bouts of cracking (jive) wise.

Gregory Porter got a late start as a recording musician, but that was because he was busy flexing his chops on a culinary stage. His … END_OF_DOCUMENT_TOKEN_TO_BE_REPLACED

The sound that Horace Silver pioneered in the ’50s and ’60s—for a while, all but synonymous with the sound of Blue Note Records—is for many … END_OF_DOCUMENT_TOKEN_TO_BE_REPLACED