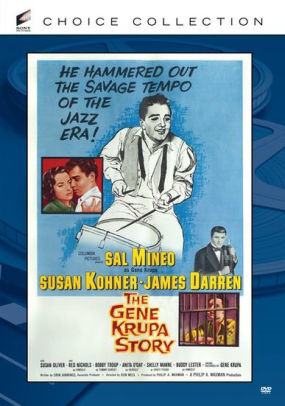 5. The Gene Krupa Story (1959)
Ah, the potent reminder of when jazz musicians were megastars. Krupa fit the larger-than-life definition of mid-century celebrity because that descriptor appeared to correspond to the dimensions of his drum sound. He is played by Sal Mineo, and this becomes one of those push-and-pull films. Should Krupa join the seminary? But wait—he loves his drums too much for a life of the cloth. Consider it a more benign version of the Robert Johnson crossroads mythos. Krupa isn’t discussed a lot as a technician because of the perceived flamboyance—and extreme volume—of his sound. Any opportunity is a good one to revisit his impeccable technique, which was even longer on feeling than chops.

Gregory Porter got a late start as a recording musician, but that was because he was busy flexing his chops on a culinary stage. His … END_OF_DOCUMENT_TOKEN_TO_BE_REPLACED

The sound that Horace Silver pioneered in the ’50s and ’60s—for a while, all but synonymous with the sound of Blue Note Records—is for many … END_OF_DOCUMENT_TOKEN_TO_BE_REPLACED

For our 2020 Year in Review section, we calculated the top 40 new releases and top 10 historical/reissue recordings of 2020 based on year-end lists … END_OF_DOCUMENT_TOKEN_TO_BE_REPLACED