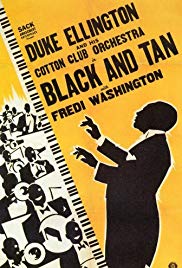 3. Black and Tan (1929)
The Duke Ellington band played jams longer than this 19-minute film, but it unfurls like one of his greatest concertos. It’s also perhaps the prime visual touchstone of the Harlem Renaissance, the Duke’s celluloid assertion that “we are here, we are not going anywhere, we make art to change the world.” It’s also kind of like Powell and Pressburger’s The Red Shoes, in which a ballerina dances herself to death. Only here that “ballerina” is Ellington’s pretend wife, who loves her man, has a heart condition, but can’t stop dancing to his music. Thus she collapses at a club rocking out to “Cotton Club Stomp”—which begs the question, “Exactly how is one not supposed to dance hard to ‘Cotton Club Stomp’?”—and then succumbs for good to Duke’s new one, “Black and Tan Fantasy,” which he’s rehearsing in his apartment with his bandmates. Lovely way to go, I suppose, if there is one.