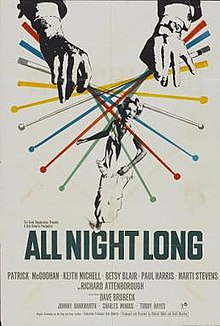 2. All Night Long (1962)
A British picture, featuring Patrick McGoohan—later to star in The Prisoner—and directed by Basil Dearden. Most Americans don’t know Dearden, but he made progressive films that were way ahead of their time, looking at homosexuality, modes of abuse, addictions, and guilt at the Dostoevsky level. He had real movie chops, a nice way with a viewfinder, and original shot compositions. Basic plot: A musician and his retired singer wife have to deal with an ambitious drummer who wants to start his own band and needs the wife to un-retire. She says no beans, brother, which makes him try to bust up the couple with allegations of an affair. The title is a reference to late-night jam sessions. You get a new Dave Brubeck take on “It’s a Raggy Waltz,” which has that nice, Dearden-esque mélange of the classy and the raddled. High class, low class, delightful jazz-movie class.

Eddie Harris [saxophonist/keyboardist/vocalist, 1934-1996] means everything to me. I feel like if Eddie Harris wasn’t there, my life quality would have been completely different. He … END_OF_DOCUMENT_TOKEN_TO_BE_REPLACED

To use an age-old (but appropriate) simile, choosing the top 10 recorded examples of jazz drumming is like trying to pick your favorite child. Each … END_OF_DOCUMENT_TOKEN_TO_BE_REPLACED

This year marks the 50th anniversary of JazzTimes—and you can help us celebrate. We’re compiling a feature for our upcoming 50th-anniversary issue on the top … END_OF_DOCUMENT_TOKEN_TO_BE_REPLACED