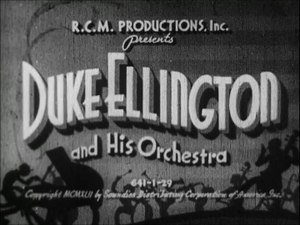 10. Jam Session (1942)
It’s three minutes long, and if you wished to be sardonic, you could say that its title is oxymoronic. But as Anton Chekhov knew—and certainly Duke Ellington too—there are all kinds of ways in this world for something to be long, well beyond the temporal. Emotionally long, spiritually long, packed and deep. This is all of that. In those three minutes, we see the Duke, Ray Nance, Rex Stewart, Ben Webster, Joe Nanton, Barney Bigard, and Sonny Greer—oh, is that all?—performing “C Jam Blues.” Ellington’s stabbing—but softly stabbing—piano notes take possession of you before the title cards have even been gotten out of the way. The musicians assemble as the music plays, then each gets a cut-in to feature them, with their name on the screen, music and image now synched—well, sometimes. Drummer Greer’s closeup is my favorite part, with body movements and music not in time but conjoined in some larger sense, like we are, as watchers, as listeners, of this film. The jazz movie dance—it never moved freer.

This year marks the 50th anniversary of JazzTimes—and you can help us celebrate. We’re compiling a feature for our upcoming 50th-anniversary issue on the top … END_OF_DOCUMENT_TOKEN_TO_BE_REPLACED

Eddie Harris [saxophonist/keyboardist/vocalist, 1934-1996] means everything to me. I feel like if Eddie Harris wasn’t there, my life quality would have been completely different. He … END_OF_DOCUMENT_TOKEN_TO_BE_REPLACED

To use an age-old (but appropriate) simile, choosing the top 10 recorded examples of jazz drumming is like trying to pick your favorite child. Each … END_OF_DOCUMENT_TOKEN_TO_BE_REPLACED