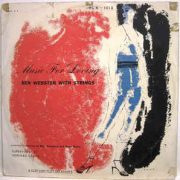 Even after 65 years, it somehow remains jarring to hear Ben Webster’s swaggering vibrato cutting through the drapery of strings. It makes sense, of course; nobody played a ballad like Webster, and by the time of the strings’ lighter-than-elsewhere accompaniment on “Willow Weep for Me,” the pairing seems as natural as anything. They then work in tandem to turn Ellington’s jaunty “Do Nothin’ Till You Hear From Me” into a sad, sentimental piece, and “Teach Me Tonight” into a straight-up romance rather than its usual flirty treatment. “My Greatest Mistake” does bring the proceedings to the edge of goopiness—but Webster’s irresistible, blues-steeped tenor sound swoops in to pull it from the brink of disaster.