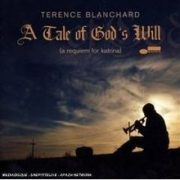 As with many of his jazz projects, A Tale of God’s Will is rooted in trumpeter Terence Blanchard’s acclaimed work as a film composer. Four of its tracks come from his score for Spike Lee’s When the Levees Broke, a documentary about the effects of Hurricane Katrina on New Orleans. It’s one of the finest works of Blanchard’s career, his gorgeous trumpet sound and envelope-pushing quintet amplified by the dramatic use of orchestration. “Levees” alone is as wrenching as any piece of jazz on record, and the creeping darkness of “The Water” instantly revives some of the most painful memories and scenes of the 2005 disaster. The strings also extend to the pieces that his band members contributed, including pianist Aaron Parks’ “Ashé,” Kendrick Scott’s “Mantra,” and especially Derrick Hodge’s heartbreaking “Over There.” In the 21st century, there has yet to be a more powerful recording of jazz with strings.