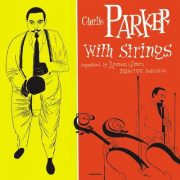 When Norman Granz signed Charlie Parker in 1949, he began trying Bird out in a number of new contexts, including at the helm of a big band and a Latin-spiced ensemble. Working with strings, however, was Parker’s own idea, a long-cherished ambition that Granz finally allowed him to realize. “Just Friends” turned out to be his biggest hit. It wasn’t because of any crass commercialism on Bird’s part, though: He served notice with that chromatic lick (one of his favorites) with which he opened the record that he hadn’t compromised an iota. Neither did he compromise on “April in Paris,” or “Out of Nowhere,” or “Autumn in New York.” Parker remained Parker, albeit one who luxuriated in pillowy orchestrations. Oh, yeah, and that whole “invented another new genre of jazz” thing.