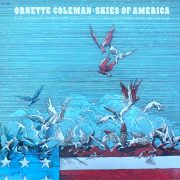 As far as the actual playing, Ornette Coleman is a co-star on his own album; it’s the London Symphony Orchestra that takes center stage. But there is not a moment in which the free-jazz visionary isn’t the music’s dominant force. The harmonic density, the melodic richness, the surprising rhythmic heft (turns out the LSO can swing!) … by the time his alto saxophone makes its first appearance at the end of Side One, it’s just another voice expressing the same language we’ve been hearing all along. Skies of America is exhausting even by free-jazz standards. It also contains some of Coleman’s most audacious work, with moments of sublime beauty like “Sunday in America” that make it a terrific accomplishment.