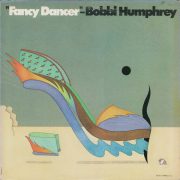 8. Bobbi Humphrey: “Uno Esta” (from Fancy Dancer, 1975)
Like Donald Byrd, flutist Bobbi Humphrey benefited from the Mizell Brothers’ streetwise production. The brothers certainly had a gift for hook-laden melodies and enticing rhythms that withstood their convoluted soundscapes. This mid-1975 gem showcases ersatz Latin-soul jazz that alludes to hot, sticky days in New York City. After a mesmerizing intro marked by shimmying synth strings, jittery percussion, a rugged backbeat, and a gripping bassline, Humphrey’s flute melody slithers in between the syncopated rhythms before dancing over the lavish groove. Hip-hop and broken-beats giants such as Madlib and IG Culture would help make this an early 21st-century DJ culture classic.

Check the price of Fancy Dancer on Amazon!

When I started listening to jazz, as a kid growing up in rural Ohio, I got pretty lucky choosing my first few records. A Dizzy … END_OF_DOCUMENT_TOKEN_TO_BE_REPLACED

You are reading the words of an Andrew Hill fanatic. The kind who has spent years poring over his music, track by track. And why … END_OF_DOCUMENT_TOKEN_TO_BE_REPLACED