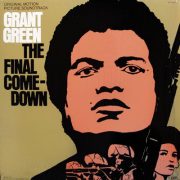 3. Grant Green: “The Final Comedown” (from The Final Comedown, 1972)
Prompted by the success of blaxploitation films and their respective soundtracks such as Sweet Sweetback’s Baadasssss Song and Shaft, Blue Note released its first movie soundtrack for The Final Comedown, a disorienting flick, starring Billy Dee Williams, about a group of black militants overtaking a white American suburb. The iconic guitarist Grant Green delivered the Wade Marcus-composed music, including the chug-a-lugging title track, which could have fit on any of his previous albums of the late ’60s or early ’70s. The album’s relative obscurity and eye-catching cover alone make it a cult favorite, but the excellence of the score—which shifts from the orchestral to the gritty—places it in the league of other ’70s movie soundtracks produced by Quincy Jones, Herbie Hancock, and J.J. Johnson.

Check the price of The Final Comedown on Amazon!

When I started listening to jazz, as a kid growing up in rural Ohio, I got pretty lucky choosing my first few records. A Dizzy … END_OF_DOCUMENT_TOKEN_TO_BE_REPLACED

You are reading the words of an Andrew Hill fanatic. The kind who has spent years poring over his music, track by track. And why … END_OF_DOCUMENT_TOKEN_TO_BE_REPLACED