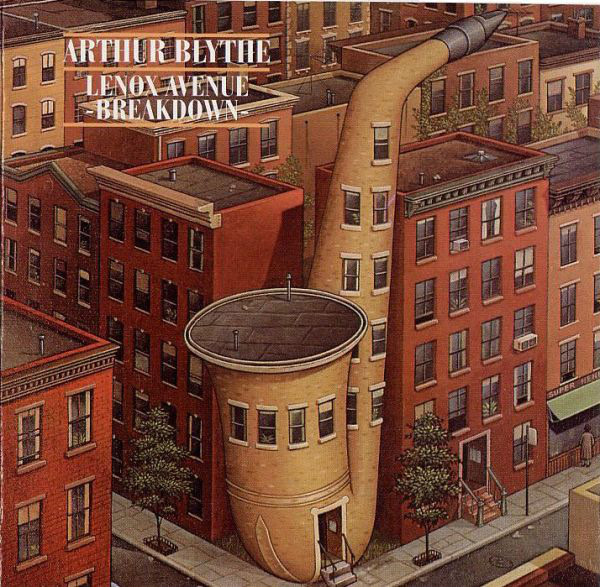 It’s odd that “Black Arthur” Blythe (a nickname he hated but was nonetheless tagged with) titled Lenox Avenue Breakdown after the main drag in Harlem, uptown, because he was one of the key ’70s figures playing downtown—and the first whose creativity was able to allure the major record labels. Blythe’s ensemble had an enormous sound that featured guitar (James “Blood” Ulmer, also briefly the guitarist in Ornette Coleman’s Prime Time), flute (James Newton), tuba (Bob Stewart), and his own salty alto saxophone along with Cecil McBee’s bass, Jack DeJohnette’s drums, and Guillermo Franco’s percussion. The unconventional-in-any-context instrumentation refused to confine itself to one corner of the jazz spectrum: it swung like the big bands, shuffled off time and key like the free groups, mixed bebop language with blues wails and angular, unique phrasing. Furthermore, Blythe was a West Coast native, bringing that region’s Mexican and Latin edges to tracks like “Down San Diego Way.” “Rather than choose between old and new jazz, tradition and ‘free,’” wrote critic Will Hermes, “they treated the music as an ongoing conversation.” That quality in Blythe and company’s work may be the essence of the entire era.

In 2020, to celebrate JazzTimes’ 50th anniversary, we made a bold (some would say foolhardy) call: the top 50 jazz albums of the past 50 … END_OF_DOCUMENT_TOKEN_TO_BE_REPLACED

In 2020, to celebrate JazzTimes’ 50th anniversary, we made a bold (some would say foolhardy) call: the top 50 jazz albums of the past 50 … END_OF_DOCUMENT_TOKEN_TO_BE_REPLACED

In 2020, to celebrate JazzTimes’ 50th anniversary, we made a bold (some would say foolhardy) call: the top 50 jazz albums of the past 50 … END_OF_DOCUMENT_TOKEN_TO_BE_REPLACED

In 2020, to celebrate JazzTimes’ 50th anniversary, we made a bold (some would say foolhardy) call: the top 50 jazz albums of the past 50 … END_OF_DOCUMENT_TOKEN_TO_BE_REPLACED