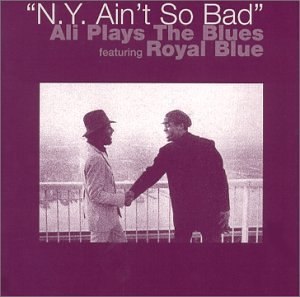 John Coltrane’s last drummer ran his own loft as well, Ali’s Alley on Greene Street in SoHo. He was still as experimental as he sounded on those Trane records—but of course, experimental doesn’t always mean freeform, as the sublimely loose, even ramshackle, blues performances on “N.Y. Ain’t So Bad” illustrate. If Ali is the leader of this jam, vocalist Royal Blue is its real star, a joyful baritone in the Jimmy Rushing tradition. (It’s his only recording.) There’s a bit of messiness when it comes to key, and some hints of contemporary jazz language, especially in Jimmy Vass’ alto playing (on “Moontipping,” he isn’t credited with soprano but sounds very like Coltrane’s sheets-of-sound on that instrument) and Ali’s surprising, often incongruous figures. (On B.B. King’s “Everyday,” he doesn’t keep time so much as pummel it.) More often, though, they—along with otherwise avant-garde loft regulars tenor saxophonist Marvin Blackman, pianist Charles Eubanks, and bassist Benny Wilson—play straight and deep into the gutbucket. In an earlier era of jazz, the “New Thing” players were often accused of abandoning or indeed never properly learning the tradition; “N.Y. Ain’t So Bad” is as deeply immersed in it as any mainstream jazz record.

In 2020, to celebrate JazzTimes’ 50th anniversary, we made a bold (some would say foolhardy) call: the top 50 jazz albums of the past 50 … END_OF_DOCUMENT_TOKEN_TO_BE_REPLACED

In 2020, to celebrate JazzTimes’ 50th anniversary, we made a bold (some would say foolhardy) call: the top 50 jazz albums of the past 50 … END_OF_DOCUMENT_TOKEN_TO_BE_REPLACED

In 2020, to celebrate JazzTimes’ 50th anniversary, we made a bold (some would say foolhardy) call: the top 50 jazz albums of the past 50 … END_OF_DOCUMENT_TOKEN_TO_BE_REPLACED

In 2020, to celebrate JazzTimes’ 50th anniversary, we made a bold (some would say foolhardy) call: the top 50 jazz albums of the past 50 … END_OF_DOCUMENT_TOKEN_TO_BE_REPLACED