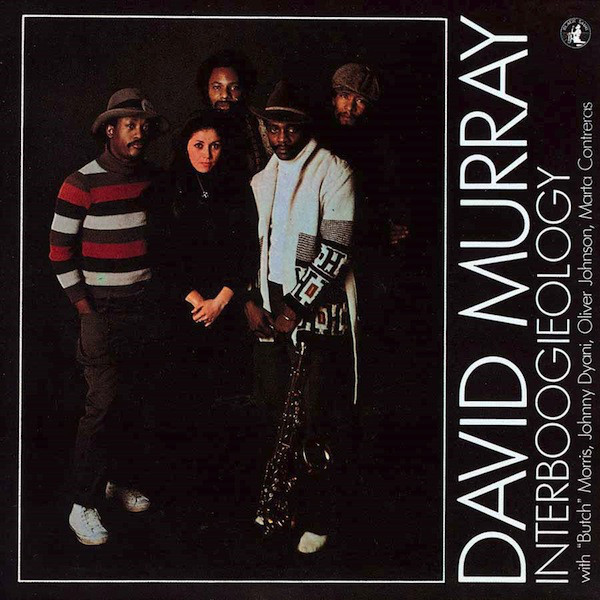 Although Rivbea was the iconic venue of the period, Rivers wasn’t necessarily the iconic musician. That distinction goes to tenor saxophonist David Murray, the Oakland native who washed up on eastern shores in 1975 and was by 1980 crowned as “jazz musician of the decade” by the Voice. He was also the decade’s most prolific recorder: Interboogieology, made only 21 months after his recording debut, was nevertheless Murray’s 11th album. That requires tremendous range, of which Interboogieology offers a number of hints. This hip 23-year-old was remarkably enamored with older generations of saxophonists—specifically, Ellington sidemen like Harry Carney (in his deep tone), Ben Webster (in his impossible swagger), and Paul Gonsalves (in his ravenous blues). He was also just as ready to take on modal jazz (witness “Home,” one of his key compositions) and tight arrangements (“Interboogieology”) as he was shrieking free jazz (“Namthini’s Shadow”), all of it delivered in his unmistakably huge, vibrato-laden sound. Working with cornetist Butch Morris—with whom he would enjoy a long collaborative relationship—and vocalist Marta Contreras, along with Dollar Brand bassist Johnny Dyani and drummer Oliver Scott, Murray actually made Interboogieology in Milan, Italy. Don’t be fooled: The breadth and sheer radiance of its ideas can only have come out of the lofts.

Big bands were already a staple of jazz by the early 1920s, but it wasn’t until 1935 that they graduated from a staple to a … END_OF_DOCUMENT_TOKEN_TO_BE_REPLACED

Joe Farnsworth, whose drumming has been the driving wheel in bands led by McCoy Tyner, Benny Golson, Harold Mabern, and Pharoah Sanders, is coming to … END_OF_DOCUMENT_TOKEN_TO_BE_REPLACED

Recently I was at a café wrapping up a day by reading Edwardian ghost stories, bored by the music on the sound system and not … END_OF_DOCUMENT_TOKEN_TO_BE_REPLACED