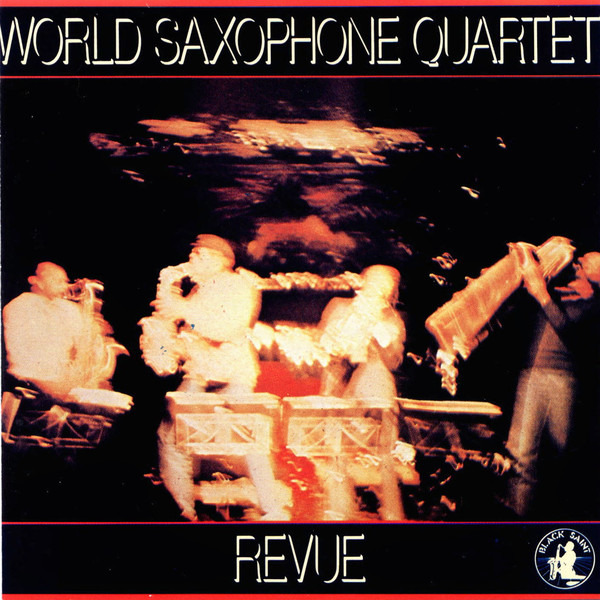 The loft-jazz scene had ended by the early 1980s. New York was recovering, the cost of living was rising, and mainstream jazz was resurging, thanks to Dexter Gordon’s much-discussed repatriation and the new stars who had taken over (or broken out from) Art Blakey’s Jazz Messengers. The clearest example of the lofts’ influence and legacy, though, might be the World Saxophone Quartet. The four members—altoists Julius Hemphill and Oliver Lake, tenorist David Murray, baritonist Hamiet Bluiett—had met and worked together in various configurations on the downtown scene. A Louisiana booking of all four saxophonists in 1977 solidified the concept, and the WSQ became one of the most acclaimed and against-all-odds successful ensembles of the 1980s. Revue, their fourth album, contains music that was unquestionably avant-garde but also remarkably accessible. Hemphill’s title track and Bluiett’s “I Heard That” offer sly (rhythm and) blues grooves; “Slide” swings as hard as anything can without a rhythm section; and even meditations like Murray’s “Ming” and Lake’s “Hymn for the Old Year” have surprising hooks in them. If loft jazz remains something of an obscurity, its aftermath is indelible.

In 2020, to celebrate JazzTimes’ 50th anniversary, we made a bold (some would say foolhardy) call: the top 50 jazz albums of the past 50 … END_OF_DOCUMENT_TOKEN_TO_BE_REPLACED

In 2020, to celebrate JazzTimes’ 50th anniversary, we made a bold (some would say foolhardy) call: the top 50 jazz albums of the past 50 … END_OF_DOCUMENT_TOKEN_TO_BE_REPLACED

In 2020, to celebrate JazzTimes’ 50th anniversary, we made a bold (some would say foolhardy) call: the top 50 jazz albums of the past 50 … END_OF_DOCUMENT_TOKEN_TO_BE_REPLACED

In 2020, to celebrate JazzTimes’ 50th anniversary, we made a bold (some would say foolhardy) call: the top 50 jazz albums of the past 50 … END_OF_DOCUMENT_TOKEN_TO_BE_REPLACED