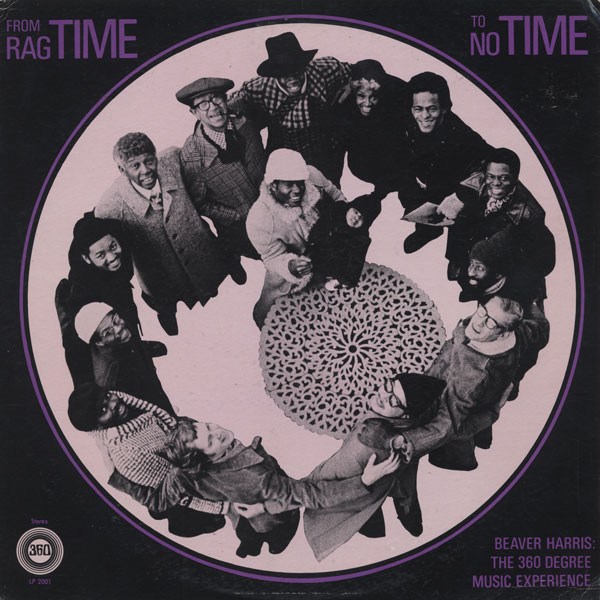 Set the needle at the start of side one on this now largely forgotten 1975 gem, and you might immediately wonder if someone at the pressing plant made a mistake. Beaver Harris’ unaccompanied drums wind up to a New Orleans Big Four beat, shift into a shuffle, and then bass and piano enter, doing the Charleston. There’s no mistake; the pianist is free-jazz stalwart Dave Burrell, and the bassist is the great Ron Carter. This is simply the “ragtime” part of the album’s title, and trad-jazz greats Doc Cheatham (trumpet), Marshall Brown (trombone), Herb Hall (clarinet), and Maxine Sullivan (vocal) join for the kicky remainder of the side. Flip it over, and time fast forwards a half-century. The sidelong “Round Trip” suite features sitar, baritone sax, flute, balafon (by Burrell), two basses (Cecil McBee joins Carter), and five percussionists who join Harris in a multi-part, multi-textural jam. Sometimes it is tonal and formal, and sometimes it is neither. Here Harris, best known at the time for his work with Archie Shepp, set the parameters for the era’s creative spirit—and let a generation representing one extreme of those parameters join with another at the opposite extreme in expressing that spirit.

In line with many resourceful jazz practitioners, Gilad Hekselman responded to the enforced isolation of the COVID-19 pandemic with a turning-lemons-to-lemonade attitude that ultimately eventuated … END_OF_DOCUMENT_TOKEN_TO_BE_REPLACED

It was the 1950s. Bebop had established itself as the new paradigm of jazz, but its newest popular variant, “cool jazz” or “West Coast jazz,” … END_OF_DOCUMENT_TOKEN_TO_BE_REPLACED

Session players have always been my thing. Not to take away from the singers or bandleaders or what have you, but I’m more interested in … END_OF_DOCUMENT_TOKEN_TO_BE_REPLACED

Walter Smith III has been burning the candle at both ends. As he connected with JazzTimes via Zoom from a New York City hotel room … END_OF_DOCUMENT_TOKEN_TO_BE_REPLACED