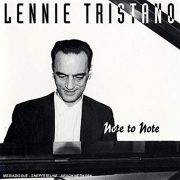 Unissued during his lifetime, “Just Pres” was one track that Tristano actually marked for posthumous release. The comparative crispness of the drums is not imagined; Tristano recorded the track in his studio with bassist Sonny Dallas and a metronome, probably in 1964, with his daughter Carol (per his wishes) overdubbing drums in 1993. Her light spang-a-lang style is as clockwork as any metronome, letting us hear how Tristano toys with harmonic and rhythmic possibilities in the relaxed, cool manner of the tune’s namesake, Tristano’s hero Lester Young. The melodic sensibility owes a great deal to Young too, and at times Tristano’s piano touch suggests the same “hollow” timbre as the saxophonist. His improvisation on the “Just Friends” changes is as free of cliché or shortcut as ever, frequently strays outside the changes and off the beat, and even proffers some new surprises: shortly into the piece he throws in a Thelonious Monk-style harmony. It may have been a mistake, but it may also have been an overdue acknowledgment of a pianist he’d once held in open contempt. Either way, it’s a demonstration that Tristano kept on taking risks and developing as an artist, even when no one was listening.

Check the price of Note to Note on Amazon!

This year marks the 50th anniversary of JazzTimes—and you can help us celebrate. We’re compiling a feature for our upcoming 50th-anniversary issue on the top … END_OF_DOCUMENT_TOKEN_TO_BE_REPLACED

Eddie Harris [saxophonist/keyboardist/vocalist, 1934-1996] means everything to me. I feel like if Eddie Harris wasn’t there, my life quality would have been completely different. He … END_OF_DOCUMENT_TOKEN_TO_BE_REPLACED

To use an age-old (but appropriate) simile, choosing the top 10 recorded examples of jazz drumming is like trying to pick your favorite child. Each … END_OF_DOCUMENT_TOKEN_TO_BE_REPLACED