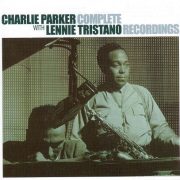 What Parker and Tristano were doing with the music in their prime was not the same thing. But their different things weren’t incompatible, and this private jam tells us that they both knew it. (The two had previously played together in all-star recordings for radio broadcast.) Tristano’s ideals of composition—thoroughly fresh but intricate melodic phrases that disregarded bar lines and obeyed their own whims of structure and pause—were the stuff of Bird’s improvisations. Tristano accompanies him admirably, though for an instant, just a few seconds in, his pacing audibly flummoxes Bird. When it comes time for the pianist’s own solo, he is as forthrightly himself as the saxophonist; his “pure improvisation” avoids the blues as surely as Parker wraps himself in it, and also keeps the groove (supplied by Kenny Clarke, who beats on a Manhattan phone directory) at arm’s length even as Parker feeds off it. (There are a few moments where Tristano superimposes polyrhythms onto Clarke’s time.) Even so, the two great individualists of the era find a curious rapprochement.

Check the price of Charlie Parker with Lennie Tristano: Complete Recordings on Amazon!

This year marks the 50th anniversary of JazzTimes—and you can help us celebrate. We’re compiling a feature for our upcoming 50th-anniversary issue on the top … END_OF_DOCUMENT_TOKEN_TO_BE_REPLACED

Eddie Harris [saxophonist/keyboardist/vocalist, 1934-1996] means everything to me. I feel like if Eddie Harris wasn’t there, my life quality would have been completely different. He … END_OF_DOCUMENT_TOKEN_TO_BE_REPLACED

To use an age-old (but appropriate) simile, choosing the top 10 recorded examples of jazz drumming is like trying to pick your favorite child. Each … END_OF_DOCUMENT_TOKEN_TO_BE_REPLACED