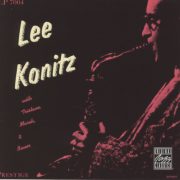 Like Tadd Dameron’s “Hot House,” “Subconscious-Lee” is based on the changes of Cole Porter’s “What Is This Thing Called Love?” and, in fact, it retains a bit more of the imprint from Porter’s melody than Dameron’s version does. Still, it’s a winding 32-bar tune that never repeats itself, and Tristano’s single improvised chorus doesn’t either. (There’s a bit more leitmotif in Bauer and Konitz’s solos, and later they trade inspired eights.) “Subconscious-Lee” was included in the 1973 Smithsonian Collection of Classic Jazz by critic and educator Martin Williams, who cited it as an early example of the “cool” school of jazz because of its brushed drums, even-tempered rhythms, and overall quiet dynamic. That should tell you something about how loosely and relatively the term “cool jazz” was batted around; under its surface, “Subconscious-Lee” is boiling.

Check the price of Subconscious-Lee on Amazon!