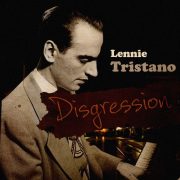 Let it never be said that Tristano didn’t offer truth in advertising. Yes, “Dissonance” features just that—and in its opening bars, the pianist not only plays dissonance on his own, but gets his trio partners, Bauer and Fishkin, to stack up more. This was at the time when Parker and Monk’s thorough reharmonization of jazz had only begun to make some sense to the public; Tristano was clearly onto something else. His more classical sensibility is apparent in the mannered phrasing and articulation of his solo, and the piece ends in a colossal bit of polyphony between Tristano and Bauer. Bebop seemed to have moved jazz into a new universe; Lennie Tristano found his own nearby galaxy to claim.

Check the price of Disgression on Amazon!

This year marks the 50th anniversary of JazzTimes—and you can help us celebrate. We’re compiling a feature for our upcoming 50th-anniversary issue on the top … END_OF_DOCUMENT_TOKEN_TO_BE_REPLACED

Eddie Harris [saxophonist/keyboardist/vocalist, 1934-1996] means everything to me. I feel like if Eddie Harris wasn’t there, my life quality would have been completely different. He … END_OF_DOCUMENT_TOKEN_TO_BE_REPLACED

To use an age-old (but appropriate) simile, choosing the top 10 recorded examples of jazz drumming is like trying to pick your favorite child. Each … END_OF_DOCUMENT_TOKEN_TO_BE_REPLACED