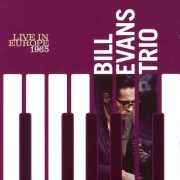 It was the end of 1965, the year before Tristano would forsake recordings entirely and American bandstands mostly, opting instead to concentrate on his primary revenue source, teaching. But this October ’65 piano summit at the Berliner Philharmonie demonstrates that it wasn’t because he’d lost a step. The lineup of pianists taking turns on blues choruses would be remarkable under any circumstances; the presence of Tristano, who famously disdained the blues, makes it impossibly rare. Also rare: any hint, when Tristano takes his turn, that he’s playing the blues anyway. He goes immediately out of time, playing a rolling series of two-handed, diminished block chords that acknowledge neither bar lines nor basic pulse for his first chorus. The second adds in a skeletal notion of the form—and then it’s over, and the announcer brings in Bill Evans. If that wasn’t weird enough, the track is titled “Blues in D” but is very clearly a blues in C. Surely Tristano didn’t name it, but defiance of convention followed him everywhere.

Check the price of Live in Europe 1965 on Amazon!