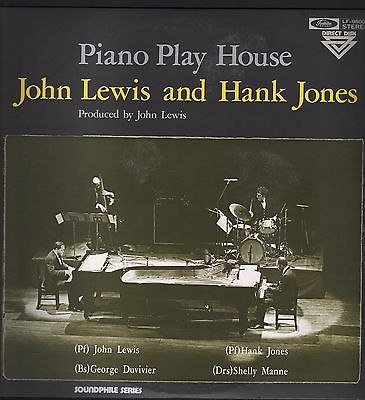 “But could he hang with other pianists?” you say. Why, glad you asked! Lewis worked regularly with Hank Jones in the late ’70s, recording and touring with and without rhythm sections. The Piano Play House concert, in Tokyo, actually does feature George Duvivier on bass and Shelly Manne on drums. Most of the time, however, Lewis and Jones work duo, Jones in the right stereo channel and Lewis in the left. (If his softer touch doesn’t give it away, the humming will.) Highlights include “St. Louis Blues,” with Lewis laying down the real deal while Jones plays figured bass, then Jones rising up to play some serious stride; “Confirmation,” showcasing powerfully fluent performances by two pianists who played with Bird; and a mighty duel on the fiendishly swinging “La Ronde,” a.k.a. “Two Bass Hit” (featuring a titanic drum solo from Manne to boot).

What’s one of the best ways to make a jazz fan for life? Start early. The books listed below can help, and they’re just 10 … END_OF_DOCUMENT_TOKEN_TO_BE_REPLACED

I did not start seriously writing lyrics until I was in my thirties, at which time the endeavor became the centerpiece of my life. Following … END_OF_DOCUMENT_TOKEN_TO_BE_REPLACED

Nnenna Freelon recently released her 11th album and first studio album in a decade, despite—but also, in a sense, because of—her personal travails of the … END_OF_DOCUMENT_TOKEN_TO_BE_REPLACED

What better way to celebrate the 50th anniversary of a music magazine than by making a top-50 list? Given how much time we’re spending at … END_OF_DOCUMENT_TOKEN_TO_BE_REPLACED