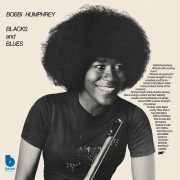 9. Bobbi Humphrey: Blacks and Blues (Blue Note, 1973)
Even more than Hubert Laws, Bobbi Humphrey did for the flute what Roy Ayers did for the vibraphone. That is, she made it a vehicle for dark and dirty funk-soul jazz. Any doubter of that claim will not last beyond the halfway point of “Chicago, Damn,” the first track on 1973’s Blacks and Blues. And as was the case with Ayers, the layers of thump-bass ostinatos and soul-crooner vocals do nothing to diminish Humphrey’s chops. One high point comes during the sexy slow jam “Just a Love Child” (which, except for its ill-advised clavinet solo, could fit well in a stag film of the period): Humphrey adds a high come-hither vocal, then tops it with an irresistible and also oddly come-hither flute line. Her real soul music, though, is in her solo on the dancefloor-ready “Jasper Country Man,” a near-perfect slice of funk that could serve as a soundtrack for the entire cultural era.

Check the price of Blacks and Blues on Amazon!

When I started listening to jazz, as a kid growing up in rural Ohio, I got pretty lucky choosing my first few records. A Dizzy … END_OF_DOCUMENT_TOKEN_TO_BE_REPLACED

You are reading the words of an Andrew Hill fanatic. The kind who has spent years poring over his music, track by track. And why … END_OF_DOCUMENT_TOKEN_TO_BE_REPLACED