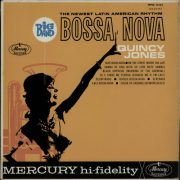 7. Quincy Jones: Big Band Bossa Nova (Mercury, 1962)
The bossa nova craze of the early 1960s gave new life to the flute as a jazz voice. So did Quincy Jones, one of the most visionary of arrangers for jazz flute. It’s most obvious in “Soul Bossa Nova” (the theme from the Austin Powers film series that put the “swing” into Swinging London), but flutes are no less key to Jones’ chart for “Manha de Carnaval,” and perhaps even more so to “Se e Tarde Me Perdoa” and “Chega de Saudade,” both of which actually feature two-way flute battles. The battlers in question are the aforementioned Rahsaan Roland Kirk and West Coast fixture Jerome Richardson, one of the most prolific and in-demand flutists of the ’60s. Even where they don’t have solo features, however, the flutes are essential members of the ensemble, their breathy tones resting at the top of Jones’ brilliantly dense chord structures. It’s all enough to ensure Big Band Bossa Nova’s canonical status for flute lovers.

Check the price of Big Band Bossa Nova on Amazon!

In 2020, to celebrate JazzTimes’ 50th anniversary, we made a bold (some would say foolhardy) call: the top 50 jazz albums of the past 50 … END_OF_DOCUMENT_TOKEN_TO_BE_REPLACED

In 2020, to celebrate JazzTimes’ 50th anniversary, we made a bold (some would say foolhardy) call: the top 50 jazz albums of the past 50 … END_OF_DOCUMENT_TOKEN_TO_BE_REPLACED