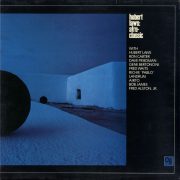 6. Hubert Laws: Afro-Classic (CTI, 1970)
No jazz flute list would be complete without Hubert Laws, and it’s hard to even mention his name without Afro-Classic coming immediately to mind. The album didn’t just make Laws (who was previously known only to hardcore jazz fans) a star; it made the CTI label an institution in the burgeoning world of jazz fusion. The fusion here wasn’t merely that of jazz and electric funk/rock, but also of classical music. Laws gives precise readings of a Mozart sonatas and a J.S. Bach piece—perhaps the only arrangements of either for flute and electric piano—then improvises on another Bach (“Passacaglia in C Minor,” on which both the flutist and keyboardist Bob James sound truly spooky). He applies a similar dark groove to James Taylor’s “Fire and Rain” and Francis Lai’s “Theme from Love Story,” with both coming out of the same voodoo that made In a Silent Way the year before. If it also subtly points the way toward the overproduced cheese that would come to dominate the CTI sound, it’s nevertheless a perfect specimen of its moment in time, as presented by one of jazz’s genuine pop stars.

Check the price of Afro-Classic on Amazon!

When I started listening to jazz, as a kid growing up in rural Ohio, I got pretty lucky choosing my first few records. A Dizzy … END_OF_DOCUMENT_TOKEN_TO_BE_REPLACED

You are reading the words of an Andrew Hill fanatic. The kind who has spent years poring over his music, track by track. And why … END_OF_DOCUMENT_TOKEN_TO_BE_REPLACED