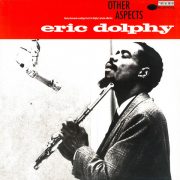 4. Eric Dolphy: Other Aspects (Blue Note, 1987 [originally recorded 1960-62])
This posthumous collection of outtakes is not strictly a flute album; on two of its five tracks Dolphy plays the saxophone in his inimitable skronky way. The other three, however, are flute pieces, and a remarkable reminder of just how different Dolphy sounded from conception to execution on that axe. Especially on the two-part solo fantasia “Inner Flight,” he plays in a clear, flowing style, making wide ballet-like leaps but then lilting back to earth like a leaf in the wind. The final track, “Improvisations and Tukras,” is a deep dive into Indian trance music. Dolphy plays long-note patterns along with tamboura player Roger Mason and tablaist Gina Lalli, who also chants vocal percussion figures. It’s an absolutely mesmerizing moment whose beautiful implications deserved further investigating. Other aspects, indeed.

Check the price of Other Aspects on Amazon!

In 2020, to celebrate JazzTimes’ 50th anniversary, we made a bold (some would say foolhardy) call: the top 50 jazz albums of the past 50 … END_OF_DOCUMENT_TOKEN_TO_BE_REPLACED

In 2020, to celebrate JazzTimes’ 50th anniversary, we made a bold (some would say foolhardy) call: the top 50 jazz albums of the past 50 … END_OF_DOCUMENT_TOKEN_TO_BE_REPLACED