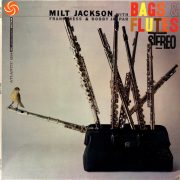 3. Milt Jackson with Frank Wess & Bobby Jaspar: Bags & Flutes (Atlantic, 1957)
When brought together, the voices of the flute and the vibraphone produce a cool, ethereal lyricism, one that jazz orchestrators have been taking advantage of for a long time. Bags & Flutes is among the first and best examples. Milt Jackson often insisted that his solo recordings were a completely different style from the soft-edged Modern Jazz Quartet, but his work with Bobby Jaspar (on two tracks) and Frank Wess (on five) suggests otherwise. Among other highlights, Jaspar joins Jackson on a “Bags’ New Groove” that—unlike the tunes of that name that are merely new arrangements of Jackson’s most famous composition—actually is a new variation. This and “Connie’s Blues,” Jaspar’s other appearance, are the best of the album, with the flutist blowing beautiful long tones on the theme and extending Jackson’s preceding improvised ideas in his own solo. Wess’ finest moment is on Ernie Wilkins’ skippy swinger “Ghana,” where he sounds somehow both graceful and madly syncopated … a combination that is at the heart of the flute’s importance to jazz.

In 2020, to celebrate JazzTimes’ 50th anniversary, we made a bold (some would say foolhardy) call: the top 50 jazz albums of the past 50 … END_OF_DOCUMENT_TOKEN_TO_BE_REPLACED

In 2020, to celebrate JazzTimes’ 50th anniversary, we made a bold (some would say foolhardy) call: the top 50 jazz albums of the past 50 … END_OF_DOCUMENT_TOKEN_TO_BE_REPLACED