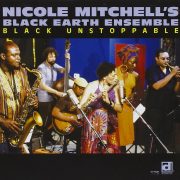 2. Nicole Mitchell’s Black Earth Ensemble: Black Unstoppable (Delmark, 2007)
Nicole Mitchell’s skill as a flutist is surpassed only by her imagination. The AACM player and composer takes Black Unstoppable as an opportunity (as its title may suggest) to run the gamut of the organization’s “Great Black Music, Ancient to the Future” concept within a single album. The eight-piece (nine, on the tracks where Ugochi Nwaogwugwu sings) burrows its way through funk grooves, freeform breakdowns, breakneck swing (sometimes with a distinct throwback vibe, as on the bubbling “Love Has No Boundaries”), and pan-Africanisms—even Afrobeat on “Life Wants You to Love.” The textures and rhythms are abundant and ever-changing, with Mitchell’s supple flute playing as the cohering agent. She has the ingenious ability to make her instrument sound perfectly at home in and appropriate to each of the multiple contexts it touches throughout this masterpiece.

Check the price of Black Unstoppable on Amazon!

In 2020, to celebrate JazzTimes’ 50th anniversary, we made a bold (some would say foolhardy) call: the top 50 jazz albums of the past 50 … END_OF_DOCUMENT_TOKEN_TO_BE_REPLACED

In 2020, to celebrate JazzTimes’ 50th anniversary, we made a bold (some would say foolhardy) call: the top 50 jazz albums of the past 50 … END_OF_DOCUMENT_TOKEN_TO_BE_REPLACED