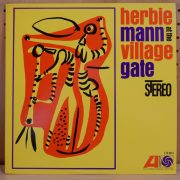 Surely you didn’t think you’d escape this list without Herbie Mann? At the Village Gate is the record with which he first turned heads. Bassist Ben Tucker brought in his composition “Comin’ Home, Baby,” and Mann turns it into a flute tour de force with a solo that fills up five of its eight-and-a-half minutes. (The tune became his calling card.) He does the same with a head-nodding Latin take on “Summertime,” then a sidelong “It Ain’t Necessarily So” backed by a simmering rhythm section featuring vibraphonist Hagood Hardy (who hums along with himself), bassist Ahmed Abdul-Malik, drummer Rudy Collins, and percussionists Ray Mantilla and Chief Bey. Even here, however, it’s Mann who’s the star, playing lines both fluid and sprightly. This album set the standard for jazz flute in the 1960s.

Check the price of At the Village Gate on Amazon!