The flute is almost universally regarded as a secondary instrument in jazz. Only a handful of players claim it as their main axe, and if one of those players isn’t the leader on a given date, it only shows up in cameos or as a contrasting color. If you go to a big-band performance, you might see that a member of the reed section has a flute standing by their seat—it gets picked up maybe once, sometimes not at all.

Apart from being a shame, this simply makes no sense. The flute is a natural fit for jazz, and for modern jazz in particular. (Although a tip of the hat goes to Wayman Carver, who first brought flute to Benny Carter and Chick Webb’s big bands in the early ’30s.) That high, penetrating tone is one of the most distinctive in music, and the instrument’s structure makes it naturally agile in handling melody. What’s more, that relative handful of specialists mentioned above are among the most imaginative minds around. Here are 10 of them. 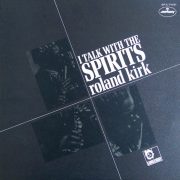 1. Rahsaan Roland Kirk: I Talk with the Spirits (Limelight/Mercury, 1965)
Exhibit A. I Talk with the Spirits is not necessarily the greatest jazz flute album ever made (is there one?); it is, however, the one that shows off the instrument to its fullest potential in the jazz idiom. “Trees” has its passages of floating, new-age-ish sounds, but it’s also a surefooted swinger, showing off a flexible tone that the polymath Kirk stretches to the limit, from flutters to graceful vibrati to coarse off-key groans. (It certainly helps that he plays a variety of types—of course he does—including bass, alto, and African wood flute.) On “The Business Ain’t Nothin’ But the Blues,” he turns the instrument into a hardcore gutbucket scraper, with flashes of split tones; then on the next (title) track, he goes in exactly the opposite direction and kisses the ether. Even the standard canon gets a treatment (via “Django”). For a robust introduction to the jazz flute, created by an artist who fully understands its capabilities, there’s no better place to go.

Check the price of I Talk with the Spirits on Amazon!

Jim Keltner is, in two words, a legend, since the 1960s one of America’s most in-demand session drummers, lending not only impeccable chops but an … END_OF_DOCUMENT_TOKEN_TO_BE_REPLACED

Gregory Porter got a late start as a recording musician, but that was because he was busy flexing his chops on a culinary stage. His … END_OF_DOCUMENT_TOKEN_TO_BE_REPLACED

The sound that Horace Silver pioneered in the ’50s and ’60s—for a while, all but synonymous with the sound of Blue Note Records—is for many … END_OF_DOCUMENT_TOKEN_TO_BE_REPLACED

If you want to find out how good your sound system is, the worst way to do it is to play your favorite jazz albums. … END_OF_DOCUMENT_TOKEN_TO_BE_REPLACED