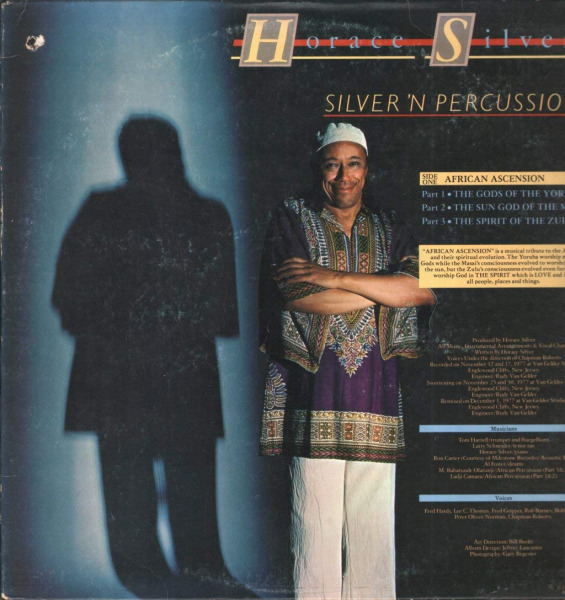 Silver ended the 1970s—and his longstanding relationship with Blue Note Records—with the “Silver ’n” series, pairing the hard-bop giant with various types of instrumental ensembles. When it came to the percussion entry, Silver decided to pursue African musical traditions. Adding percussionists Babatunde Olatunji, Ladji Camara, and Omar Clay to his existing quintet, however, didn’t stop Silver from making an entirely characteristic album. (Even if it did consist of two three-movement suites.) “The Spirit of the Zulu,” which closes out side one’s “African Ascension” suite, is a 10-minute modal workout. It forms a Zen-like stasis (albeit one that drips with Silverian soul) that saxophonist Larry Schneider, trumpeter Tom Harrell, and Silver himself rip to pieces with their passionate soloing. Modal form does nothing to slow down Silver’s use of hip hard-bop harmonies, nor does the augmented percussion diminish bassist Ron Carter and drummer Al Foster’s rabid swing.

Recently I was at a café wrapping up a day by reading Edwardian ghost stories, bored by the music on the sound system and not … END_OF_DOCUMENT_TOKEN_TO_BE_REPLACED

“I live close to the ocean here in Los Angeles, so I’m surfing pretty much every day, and fortunately my family is close by—my folks, … END_OF_DOCUMENT_TOKEN_TO_BE_REPLACED

When I started to put this list together, first I wanted to think about the harmonica players that had an impact on my playing, on … END_OF_DOCUMENT_TOKEN_TO_BE_REPLACED

Zodiac Suite (Asch, 1945; reissued by Smithsonian Folkways, 1995) Williams’ masterpiece is both an impressionistic representation of the signs of the zodiac and a striking … END_OF_DOCUMENT_TOKEN_TO_BE_REPLACED