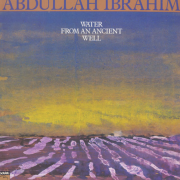 Ibrahim first formed his septet Ekaya in 1983 with Cecil McBee on bass; by this second recording, David Williams had taken over the bass chair. Lest it be lost in his heavy reserves of South African tradition and Monk-inspired quirky syncopation, Ibrahim could still swing as hard as anyone in jazz. Ekaya’s four-horn, little-big-band format was a fantastic one for showing off that capability, and one can almost see dancers whirling to the still-folk-steeped tribute to then-jailed Nelson Mandela. There are beautiful, knowing solos by all four horns: baritone saxophonist Charles Davis, trombonist Dick Griffin, tenor saxophonist Ricky Ford, and alto saxophonist Carlos Ward. Ibrahim himself stays in the background, but his smart, swinging fills are nonetheless difficult to miss.

This year marks the 50th anniversary of JazzTimes—and you can help us celebrate. We’re compiling a feature for our upcoming 50th-anniversary issue on the top … END_OF_DOCUMENT_TOKEN_TO_BE_REPLACED

As a supplement to our July/August 2020 feature on the pedal steel in jazz, check out these seven twangy collections that are worth your time. … END_OF_DOCUMENT_TOKEN_TO_BE_REPLACED

We all know the big names of Blue Note Records—Coltrane, Rollins, Monk, Davis, Silver, Blakey, Hancock, Shorter, and so on—as well we should. But what … END_OF_DOCUMENT_TOKEN_TO_BE_REPLACED

Not only is Jackie McLean my musical hero, but in many ways he is my musical father. I met him as a senior in high … END_OF_DOCUMENT_TOKEN_TO_BE_REPLACED