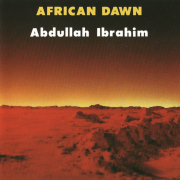 By the time of 1982’s solo outing African Dawn, “Dollar Brand” had evaporated entirely from the billing. Ibrahim was Ibrahim, and though then as now he primarily focused on his own compositions, he still had an affection for the standard repertoire. There’s a sly pleasure behind the somewhat grim determination of Ibrahim’s playing on Jesse Greer’s “Just You, Just Me,” the latter being constantly brought home with his hammerlike insistence on a bass drone. Still, he briefly lets the mask slip in the gleeful center of the tune, swinging away with references to stride in the rhythm and to gospel in the harmony. The dark drone quickly reasserts itself, but Ibrahim continues to hint here and there that he’s enjoying himself. His closing, an Ellingtonian trill, finally gives the game away.

This year marks the 50th anniversary of JazzTimes—and you can help us celebrate. We’re compiling a feature for our upcoming 50th-anniversary issue on the top … END_OF_DOCUMENT_TOKEN_TO_BE_REPLACED

As a supplement to our July/August 2020 feature on the pedal steel in jazz, check out these seven twangy collections that are worth your time. … END_OF_DOCUMENT_TOKEN_TO_BE_REPLACED

We all know the big names of Blue Note Records—Coltrane, Rollins, Monk, Davis, Silver, Blakey, Hancock, Shorter, and so on—as well we should. But what … END_OF_DOCUMENT_TOKEN_TO_BE_REPLACED

Not only is Jackie McLean my musical hero, but in many ways he is my musical father. I met him as a senior in high … END_OF_DOCUMENT_TOKEN_TO_BE_REPLACED