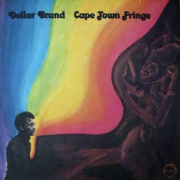 For better or for worse, “Mannenberg” is the piece for which Abdullah Ibrahim will be remembered. Often described as “bittersweet,” this anthem of apartheid resistance is far more sweet than bitter; it’s a song of hope, not anguish. Its beautiful, instantly memorable hook and rolling gospel-spiked groove would probably have been enough to elevate “Mannenberg” (released in the United States as “Cape Town Fringe” and frequently still known as such here—although Brand named it for a Cape Town township that was a hotbed of resistance) to anthemic status. Brand’s limber but tinny piano amplifies that feeling. But the tune is also a feature for tenor saxophonist Basil Coetzee, whose long solo bursts with such life and warmth and humanity that he was nicknamed “Mannenberg” for the rest of his life. Not surprisingly, Ibrahim would continue performing and recording his most famous composition; it even made a resplendent appearance during the inauguration festivities of president Nelson Mandela.

This year marks the 50th anniversary of JazzTimes—and you can help us celebrate. We’re compiling a feature for our upcoming 50th-anniversary issue on the top … END_OF_DOCUMENT_TOKEN_TO_BE_REPLACED

As a supplement to our July/August 2020 feature on the pedal steel in jazz, check out these seven twangy collections that are worth your time. … END_OF_DOCUMENT_TOKEN_TO_BE_REPLACED

We all know the big names of Blue Note Records—Coltrane, Rollins, Monk, Davis, Silver, Blakey, Hancock, Shorter, and so on—as well we should. But what … END_OF_DOCUMENT_TOKEN_TO_BE_REPLACED

Not only is Jackie McLean my musical hero, but in many ways he is my musical father. I met him as a senior in high … END_OF_DOCUMENT_TOKEN_TO_BE_REPLACED