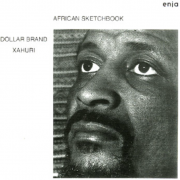 Brand’s solo concerts tend to run together as one long performance, even as he shifts from one composition or improvisation to the next. You need to experience a full set to hear how he constructs an arc across it. In the case of 1969’s African Sketchbook, recorded in Switzerland, the arc begins and ends with the preternatural calm of “Salaam-Peace-Hamba Kahle.” As the title suggests, it was composed shortly after Brand’s conversion to Islam. (He had already taken the Muslim name of Abdullah Ibrahim, though he would continue performing as Dollar Brand through the early 1980s.) The pieces coming between these two bookends are often fraught and emotionally intense, but “Salaam-Peace-Hamba Kahle” suggests the new and peaceful center that Brand’s spiritual conversion had brought to his life and consciousness. It is also a glimpse of the melodic tenderness that would in the coming years become the primary staple of his aesthetic.

This year marks the 50th anniversary of JazzTimes—and you can help us celebrate. We’re compiling a feature for our upcoming 50th-anniversary issue on the top … END_OF_DOCUMENT_TOKEN_TO_BE_REPLACED

As a supplement to our July/August 2020 feature on the pedal steel in jazz, check out these seven twangy collections that are worth your time. … END_OF_DOCUMENT_TOKEN_TO_BE_REPLACED

We all know the big names of Blue Note Records—Coltrane, Rollins, Monk, Davis, Silver, Blakey, Hancock, Shorter, and so on—as well we should. But what … END_OF_DOCUMENT_TOKEN_TO_BE_REPLACED

Not only is Jackie McLean my musical hero, but in many ways he is my musical father. I met him as a senior in high … END_OF_DOCUMENT_TOKEN_TO_BE_REPLACED