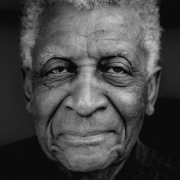 A “new” composition (which Ibrahim actually began performing in 2012, but didn’t record until now), “Dreamtime,” like “The Wedding,” features Cleave Guyton on an unimprovised lead. The context, however, is completely different. Guyton plays flute, not alto, for one thing; for another, the piece is moody and mysterious. And while Guyton still doesn’t improvise, Ibrahim does, in short, subtle phrases that are more like obbligati than fully formed improvisational lines. Apart from its sophistication, both compositional and emotional, it’s hard to say anything with certainty about meaning or evocation in “Dreamtime”; the very idea of dreams has multiple layers of meaning in Ibrahim’s culture and in his music. This opening track of The Balance sets a similarly multilayered tone: ephemeral, ambiguous, strange, and beautiful.

This year marks the 50th anniversary of JazzTimes—and you can help us celebrate. We’re compiling a feature for our upcoming 50th-anniversary issue on the top … END_OF_DOCUMENT_TOKEN_TO_BE_REPLACED

As a supplement to our July/August 2020 feature on the pedal steel in jazz, check out these seven twangy collections that are worth your time. … END_OF_DOCUMENT_TOKEN_TO_BE_REPLACED

We all know the big names of Blue Note Records—Coltrane, Rollins, Monk, Davis, Silver, Blakey, Hancock, Shorter, and so on—as well we should. But what … END_OF_DOCUMENT_TOKEN_TO_BE_REPLACED

Not only is Jackie McLean my musical hero, but in many ways he is my musical father. I met him as a senior in high … END_OF_DOCUMENT_TOKEN_TO_BE_REPLACED