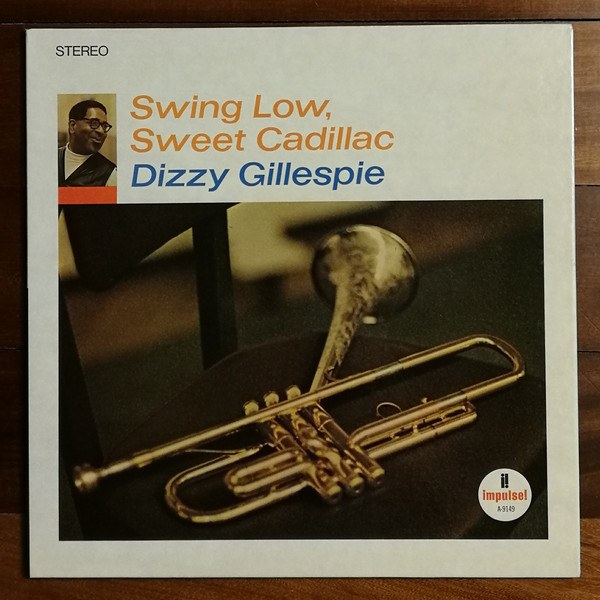 “Swing Low, Sweet Cadillac” was the title track of what turned out to be Gillespie’s biggest-selling album in years. Perhaps that was because it represented yet another attempt to stay current: Diz and the band work soul-jazz grooves all through the album (recorded live in Los Angeles). “Swing Low,” however, merged that currency with the same authentic folk vibe that had characterized “Cubana Be”/“Cubana Bop” 20 years before. This time Gillespie lets his humor run rampant in the Afro-Cuban chants, which include calls of “Ecaroh!” (the title of a composition by his friend Horace Silver, and also “Horace” backwards) and “Yo Mamo!” (“And yo papa too,” saxophonist James Moody ad libs.) Then comes four minutes of what Wilson Pickett aptly described as “cornbread music”—played with a verve that holds its own against the Wicked Pickett.

When I think of Impulse! Records, I first think of the Coltrane legacy and that classic orange, black, and white branding on the labels. Then … END_OF_DOCUMENT_TOKEN_TO_BE_REPLACED

After a year of lockdown, it’s getting hard to tell if someone is naturally gregarious, or if the need for conversation and interaction is driving … END_OF_DOCUMENT_TOKEN_TO_BE_REPLACED

What better way to celebrate the 50th anniversary of a music magazine than by making a top-50 list? Given how much time we’re spending at … END_OF_DOCUMENT_TOKEN_TO_BE_REPLACED

For this Before & After listening session, originally done via Zoom and streamed live online, we decided that a multifaceted subject like bassist/composer/arranger/bandleader/educator John Clayton … END_OF_DOCUMENT_TOKEN_TO_BE_REPLACED