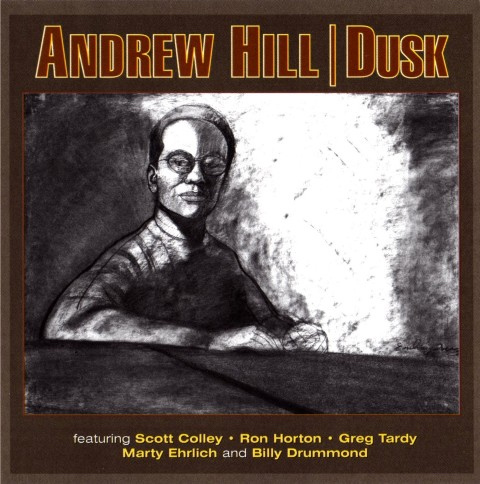 If Strange Serenade was hailed as a return to form, Dusk was all but put on an altar. Hill used the same orchestration as he had 35 years earlier on Point of Departure, resulting in perhaps his most acclaimed recording since that classic. But he used a much softer touch with it: careful watercolors rather than bold acrylics. Even on “15/8,” the album’s most frenetic, adrenalized tune, the payload is lightened; the horns (altoist Marty Ehrlich, tenorist Greg Tardy, trumpeter Ron Horton) are at some distance from the microphone, while bassist Scott Colley and drummer Billy Drummond seem right up on it but still take a milder attack. Nevertheless, the melody is as abstruse, complex, and irresistible as ever, and distance or no distance, the musicians let loose in the solos. Hill leads the charge, playing an improvised chiaroscuro as stark as that in the drawing of him on the cover.

Camille Thurman blowing tenor with the Jazz at Lincoln Center big band behind her. Fronting the quartet co-led by drummer Darrell Green. Switching from saxophone … END_OF_DOCUMENT_TOKEN_TO_BE_REPLACED

As anyone who has spent even an afternoon in New Orleans knows, that city’s traditional jazz has never gone away. But those of us who … END_OF_DOCUMENT_TOKEN_TO_BE_REPLACED

When I think of Impulse! Records, I first think of the Coltrane legacy and that classic orange, black, and white branding on the labels. Then … END_OF_DOCUMENT_TOKEN_TO_BE_REPLACED

After a year of lockdown, it’s getting hard to tell if someone is naturally gregarious, or if the need for conversation and interaction is driving … END_OF_DOCUMENT_TOKEN_TO_BE_REPLACED