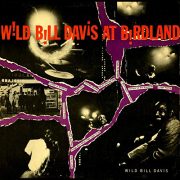 Before the hard-bop era revolutionized the Hammond organ, Wild Bill Davis recognized its potential. An alum of the groundbreaking rhythm & blues band Louis Jordan’s Tympany Five, Davis preferred longer, scratchier tones on the organ—at least as a melody player. Otherwise he played it like a drum: He literally doubles the drummer on “Lullaby of Birdland.” In either case, Davis liked his playing to be lively and fun to the point of raucous, as on “Things Ain’t What They Used to Be” and “Night Train,” and he swung the Hammond harder than any musician before or since—Jimmy Smith included. Incidentally, that’s also Davis on the jovial vocals, to which he applies the same kind of percussive force as he does on the keys (dig “Chicken Gumbo”).