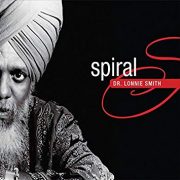 Some jazz fans gave the National Endowment for the Arts a little flak in 2017 for choosing Dr. Lonnie Smith as an NEA Jazz Master. True, he’s not a game-changer. But he does have an approach to the soul-jazz organ tradition that’s both virtuosic and idiosyncratic. Spiral is perhaps an unusual choice among his recordings, but it demonstrates his uniquely weird take on jazz organ, from the smoky darkness of “Mellow Mood” (more moody than mellow) and “Spiral” to the strange twists of “I Didn’t Know What Time It Was” and “Beehive” to the relatively conventional but still unexpected “Sukiyaki.” In addition, it features Smith with perhaps the best trio of his long career, Jonathan Kreisberg on guitar and Jamire Williams on drums. It’s the curious jazz fan’s best bet for tracking how the soul-jazz organ tradition developed into the 21st century.