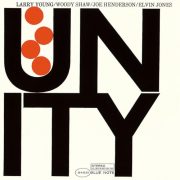 As original as Smith, Newark native Larry Young might have—should have—been as revolutionary too. But Young remains a singular figure in jazz history, a modal organist who adapted his instrument for the New Thing. Unity was his breakthrough in that direction. Flanked by an unbelievable murderer’s row of experimenters (trumpeter Woody Shaw, tenor saxophonist Joe Henderson, drummer Elvin Jones), Young sacrifices none of the groove associated with the organ (including hard-swinging renditions of “Monk’s Dream” and “Softly, as in a Morning Sunrise” as if to prove the point). He merely augments it with carefully streamlined changes, soloists who push the music further and further out, and three remarkably progressive Woody Shaw compositions, including the premiere of his most famous, “The Moontrane.”