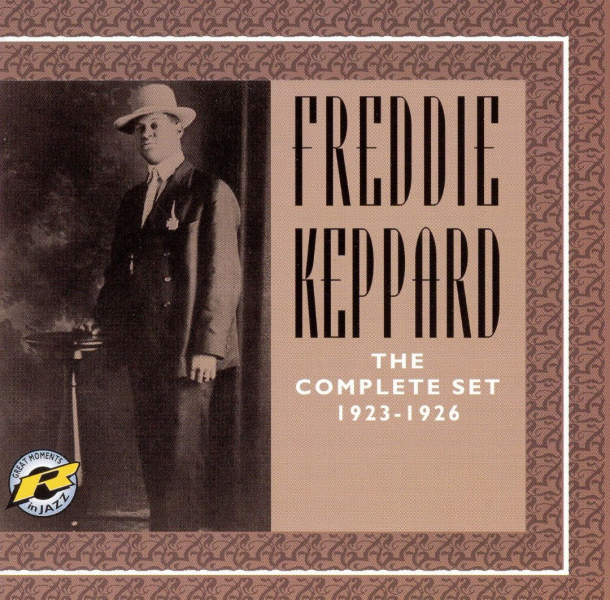 Freddie Keppard was relatively late to the recording party (having passed up a chance to record in 1915), but came into the jazz story relatively early. Keppard was King Oliver’s predecessor at the top of the jazz trumpet heap, a profoundly innovative player who was so paranoid about his techniques being copied that he played with handkerchiefs over his hands. In “Stock Yards Strut,” we can also hear his influence on, of all people, Sidney Bechet. The nimbleness and speed of his rhythms can make it hard to detect, but Keppard plays the kind of shuddering vibrato at the ends of his phrases that was Bechet’s trademark. Meanwhile, he’s got a clarinetist of his own (Johnny Dodds, who appeared previously with Oliver) adding a charge that sends the music shooting into the stratosphere.

Camille Thurman blowing tenor with the Jazz at Lincoln Center big band behind her. Fronting the quartet co-led by drummer Darrell Green. Switching from saxophone … END_OF_DOCUMENT_TOKEN_TO_BE_REPLACED

When I think of Impulse! Records, I first think of the Coltrane legacy and that classic orange, black, and white branding on the labels. Then … END_OF_DOCUMENT_TOKEN_TO_BE_REPLACED

After a year of lockdown, it’s getting hard to tell if someone is naturally gregarious, or if the need for conversation and interaction is driving … END_OF_DOCUMENT_TOKEN_TO_BE_REPLACED

What better way to celebrate the 50th anniversary of a music magazine than by making a top-50 list? Given how much time we’re spending at … END_OF_DOCUMENT_TOKEN_TO_BE_REPLACED