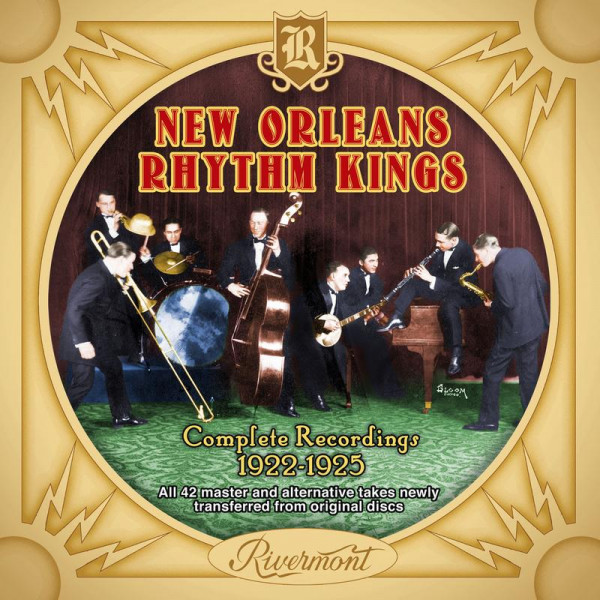 The stiffer rhythms of the Original Dixieland Jazz Band might suggest that white guys, even from New Orleans, couldn’t play jazz. Let the New Orleans Rhythm Kings put that idea to rest. From the tipoff of “She’s Crying for Me,” the band has mastered the rhythmic nuances of the city. Cornetist Paul Mares borrows from Louis Armstrong’s phrasing—before Armstrong had even started recording with his Hot Five—and clarinetist Charlie Cordilla lifts some of Bechet’s flair, if not the intricacies of his sound. Both musicians, however, develop original styles, as do trombonist Santo Pecora, pianist Red Long, banjoist Bill Eastwood, and tubist Chink Martin. “She’s Crying for Me” isn’t on the cutting edge of jazz in 1925, but it is aware of and incorporating what the vanguard is working on.

A Venn diagram of Kirk Knuffke’s musical production would be complicated to decipher. Born and raised in Colorado, mentored by the late Ron Miles, Knuffke moved … END_OF_DOCUMENT_TOKEN_TO_BE_REPLACED

In an interview with Wayne Enstice and Janis Stockhouse in Jazzwomen: Conversations with Twenty-One Musicians more than 20 years ago, pianist/composer Joanne Brackeen described herself … END_OF_DOCUMENT_TOKEN_TO_BE_REPLACED

In 2020, to celebrate JazzTimes’ 50th anniversary, we made a bold (some would say foolhardy) call: the top 50 jazz albums of the past 50 … END_OF_DOCUMENT_TOKEN_TO_BE_REPLACED

In 2020, to celebrate JazzTimes’ 50th anniversary, we made a bold (some would say foolhardy) call: the top 50 jazz albums of the past 50 … END_OF_DOCUMENT_TOKEN_TO_BE_REPLACED